Kadaver - The Man Who Didn´t Want To Feel 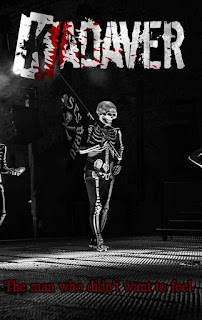 A new release from Spanish label Marbre Negre by Israel-based one-man death-industrial/power-electronics act Kadaver. Called The Man Who Didn´t Want To Feel, and showing a curious photo of a man in a skeleton costume.. with a flag. Not sure bout the first word on the flag, but the second Breu (Portuguese) means pitch-black in English. It includes 5 tracks, with the first 4 of them called I Feel Like Destroying You (part 1,2,3 of 4) with Escaping Into the Night is the fifth and last track on the album. The physical cassette release has been made in a limited run of 22 (so act fast).
The first track begins with that... insane and sun-bleached Texas Chainsaw-mood. Just focus on the scene where Mrs. Chambers is being harassed by the cannibalistic family while being tied to a chair, the scene is insane and grim... and lucky you! That is how this album starts. Walls of nerve-grinding metallic noise with screams of torment coming from a deep subterranean cave. Monotonic harsh-noise with bleak horror-ambient in the background.
The next track quickly starts where the first track ended, being more direct and heavy in sound. Sounds like a train running through hell, or a falling elevator going fast down into hell. A continuous heavy treatment in torturous sound... lovely! Soundwise sensations of minor explosions can also be felt on this recording! Interesting ending with this track!
The third track feels like a grind saw running out of focus, hitting the listener with full force. Heavily distorted bass-elements, screaming machines, and random chaotic glitches here and there. A perfect executed fusion between death-industrial and HNW.

The fourth track starts on the B-side of the cassette and ends the torturous I Feel Like Destroying You-saga in absolute pleasure. Really love the distorted and hidden recorded human-voice here, just sound sick and desperate (as it should). The noise-treatment on this track is just pure punishment, worthy of any noise-sicko!
The last track Escaping Into The Night moves into murky creepy-crawler minimalism. Might just be my favorite track on the album, I have this thing with stuff being really dark and incredible subtle at the same time. Think Brighter Death Now´s 1890, that kind of stuff. A minimal and atmospheric track which really puts some imagination into the listener's mind.
A terrific and horrific avant-garde noise-treatment for the upcoming Halloween! There´s aggression, ambiance, mood, etc. All packed nicely into this lovely black cassette. It won´t let you down, not for a second!